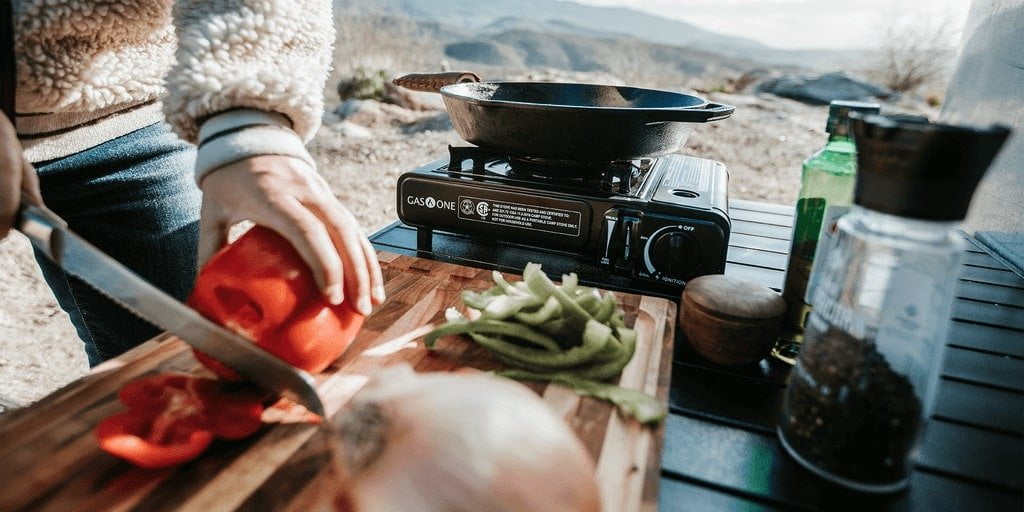 While many single burner camp stoves look similar, they have some quirks you need to know about to be able to make an educated decision.

Many cheaper stoves can only be fuelled by butane, which, in itself isn’t a problem considering butane is so cheap. However, its low-cost means during peak season it’s often out of stock. So if you don’t want to be dashing around finding butane before your camping trip, a duel fuel stove is a better option.

But don’t worry, we’ve got all this covered below, so just keep reading and you’ll find the right one for you.

In a hurry? Here’s our top 3 picks for the best single burner camp stove.

The Coleman One-Burner stove is the perfect choice for beginner campers. It comes with super clear instructions, Instastart ignition, is easy to operate and comes with a travel case.

With a maximum BTU output of 7,650 it offers decent heat for such a little stove. While the heat output is nothing to phone home about, it does heat up fast.

The stove is a single fuel unit and an 8.8oz butane cylinder will last roughly 1.25 hours of cooking on full power. The butane cylinder slots nicely into an interior compartment for safe and convenient cooking.

The neat thing about butane is its low cost. Unbranded butane cylinders from the likes of Walmart cost around $2 to $3. So if you’re looking to camp and cook on a budget, this butane fueled stove is a good option.

The stove itself can comfortably fit a pan or skillet of up 10″ and is more than capable of quickly boiling water, making chili, or heating up some late-night hot dogs.

As with most Coleman stoves, the main issue is the ability to regulate temperature. While it’s easy to get a high temperature, it’s much more difficult to get a low heat for simmering without accidentally turning it off. However, with a bit of practice and learning the “knack”, it’s not too much of an issue.

The GasOne GS-3900P is the most powerful single burner camping stove on the market.

If you enjoy cooking but want something small and compact nothing will beat the GasOne GS-3900P. It’s super high heat output ensures you can cook meals or boil water as quickly as you would at home. No waiting for 45 minutes to boil some pasta. It can also easily handle pans or skillets up to 10″.

Another of its main advantages is it compatibility with both butane and propane fuels.

While butane is often the most popular choice because of its cheap price, at peak times and popular camping spots, butane can often be sold out at most stores. Being able to use both fuels allows much more flexibility and versatility no matter your circumstances.

It can operate on a single 8oz butane cartridge or a 16.4oz propane cylinder. It also comes supplied with the necessary propane adaptor hose included, so you don’t have to worry about finding compatible accessories.

While photographs don’t really highlight just how good this feature is, the built-in wind guard works really well and largely prevents the flame from going out in windy weather.

Despite its solid built and high quality, it’s still lightweight, super compact and extremely easy to use. It also comes with a carry case for even easier transportation.

One area where all GasOne stoves outperform Coleman stoves is in heat regulation capability. Turning the temperature control knob on the GS-3900P is intuitive and makes it much easier to achieve a low heat for simmering than Coleman stoves.

As an added bonus the stove comes supplied with 4 FREE butane canisters to get you up and running instantly.

The Jetboil MiniMo is a little different from most single burner camp stoves featured on this list and that’s because it’s targetted towards backpackers and hikers. However, its powerful output and high-quality build make it a justified choice even if you just want something compact and lightweight.

While you might think that its cooking capabilities may be lacking due to its primary focus being weight and size, you couldn’t be more wrong.

One of the Jetboil MiniMo’s best features is its heat regulation. It uses a basic knob turn system in which one full turn incrementally increases or decreases the heat. This allows you to easily achieve a light simmer to a full rolling boil.

Equally as impressive is its push-button ignition. It never fails to light. As in, we have tested and tested it and it lights instantly every damn time.

The Jetboil MiniMo comes supplied with a FluxRing cooking cup that can be used for both cooking and eating. It also features folding metal handles for easier cooking and storing away.

Speaking of storing away, everything fits neatly inside the cooking cup, including the gas canister for compact storage and transportation.

The GasOne GS-3400P is the 3900P’s baby sibling and is by far the best budget single burner camp stove in the industry.

It has extremely similar specs and features to the 3900P, but offers less power at 8,000 BTU’s compared to the whopping 15,000 of the 3900P. However, if faster cooking and heating times aren’t important to you then the 3400P is absolutely your best bet.

It has duel fuel capabilities ensuring you don’t get snookered during camping season and all the butane canisters are sold out within a 50km radius. It accepts an 8oz butane cylinder and a 16.4oz propane cylinder. It also comes supplied with the necessary propane converter regulator hose.

As with most single burner stoves, it can fit a pan up to 10″ in diameter comfortably. It’s super easy to use, easy to control, easy to use and easy to transport.

Basically if you’re looking for a cheap single burner camp stove, get this.

There was no way the GasOne GS-8300 couldn’t be included in this list. Just look at it. If you want something that will make head turns at the campground AND cook you some good food fast nothing beats this.

Sometimes camping gear can get a little boring and generic, and it’s always nice to come across something that looks a little different and stands out from the norm.

And this certainly stands out.

It’s not all just about looks though, with an 8,000 BTU output, it’s on the higher end of the average power of a single burner camp stove. Particularly considering just how compact and portable it is.

The heat output is more than ample to boil water fast and cook a proper meal such as a chicken curry in a similar time to cooking at home.

The stove burner itself can easily handle a 10-12″ diameter pan or kettle. It’s quirky design actually allows for pans larger than most other single burner stoves can handle.

It also comes supplied with a nice clutch design carry case for easy storage and transportion.

And just incase you need anymore convincing, it also comes supplied with 4 butane canisters. So you know when this gets dropped off at your front door, it’s all ready to go. 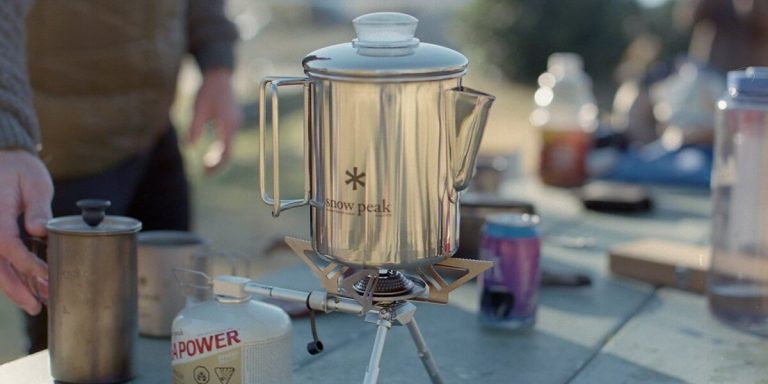 Our roundup of the best stainless steel coffee pots for camping 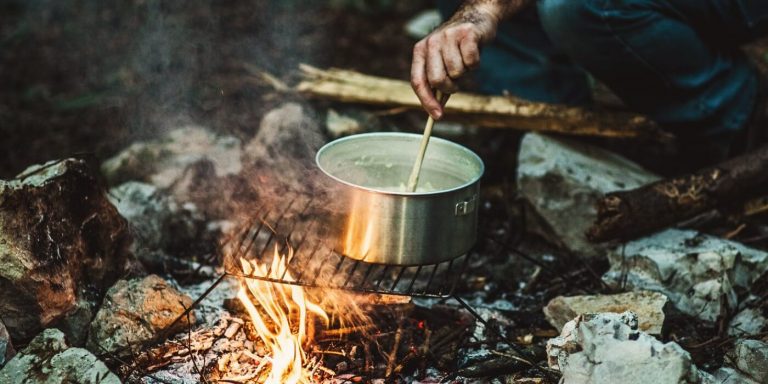 Our roundup of the best camping cookware for an open fire 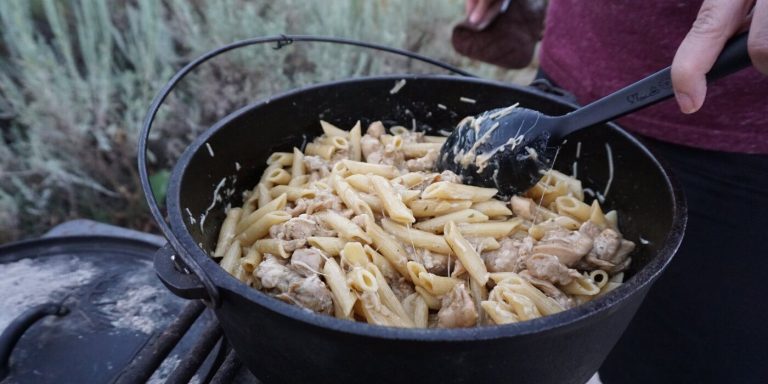 Our roundup of the best camping cookware for family camp cooking

Our round up of the best Dutch ovens for camping 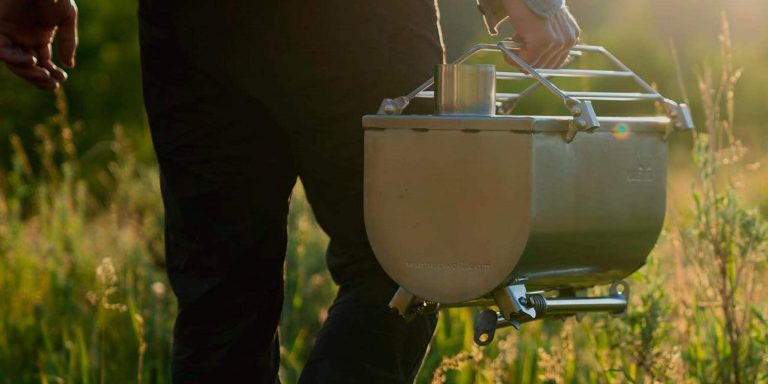 Our roundup of the best tent stoves for winter camping 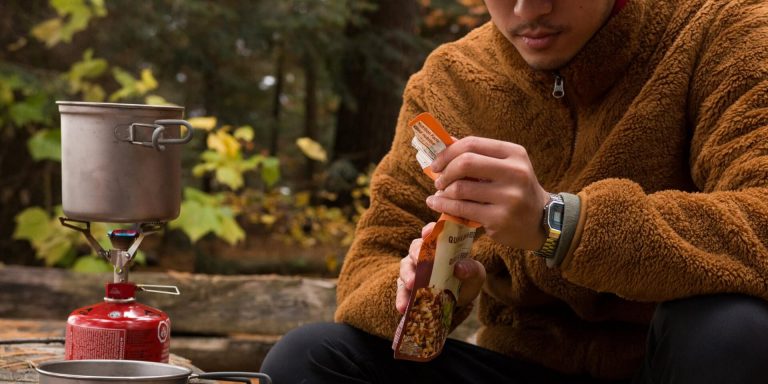 Our round up of the best camping stoves to boil water